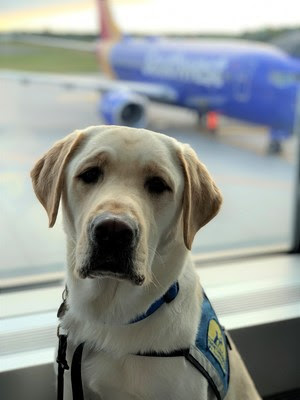 Big changes for passengers flying with service and emotional support animals will go into effect at the end of December after the Department of Transportation released updated rules for the Air Carrier Access Act (ACAA) this week. The DOT received input from the public, including leading service dog provider Canine Companions® and the international governing body for service dogs, Assistance Dogs International (ADI) – of which Canine Companions is a founding member.

Recently, the presence of service dogs and emotional support animals on planes has skyrocketed, resulting in increased incidences of untrained dogs, cats, pigs and more causing disturbances with sometimes serious consequences. In a recent study by the two organizations, 25% of service dog users reported incidents of out of control dogs interfering with trained service dogs mid-flight.

“A flight attendant advised a customer that if their emotional support dog wouldn’t stop barking at Miles that they would have to deplane.” says Chet McDoniel, who is partnered with Canine Companions Service Dog Miles to assist with challenges associated with quadruple limb differences. The situation got more unusual, according to McDoniel. “The customer complained saying Miles should leave! The flight attendant was really supportive defending our rights, especially since Miles was behaving impeccably.”

The new ruling has effectively eliminated emotional support animals from flying in the cabin, instead reverting to the rules and requirements for pets – requiring that the animal be in a carrier at all times or flown in cargo, and pet fees are permitted. Importantly, task-trained psychiatric service dogs like those Canine Companions trains to assist veterans with post-traumatic stress disorder, are now appropriately grouped with task-trained service dogs for other disabilities.

“We recognize that many people benefit enormously from having an emotional support animal,” says Paige Mazzoni, Canine Companions’ CEO. “However, these dogs don’t receive the same level of socialization and training to be prepared for the experience of riding in an airplane or managing the unique stressors of air travel, resulting in unsafe situations for airline staff, the public and legitimate service dogs.”